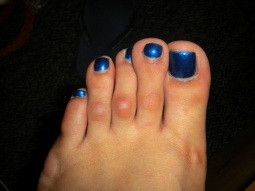 hammertoes is a condition which causes one or more of the smaller toes to become bent upwards. The toe can be straightened but if ignored may become a permanent hammertoes deformity. Each of the 4 smaller toes consist of 3 bones called phalanges, forming two interphalangeal joints. The toe bends at the proximal or first interphalangeal joint. Initially it can be straightened, but if left untreated, this can become a permanent deformity.

Hammer toes are most frequently caused by a muscle – tendon imbalance in the foot, and are seen both in adults and children. Foot muscles work in pairs to straighten and bend the toes. If your foot has a biomechanical defect, the muscles tighten and the tendons shorten. Eventually, the toe muscles can?t straighten the toe, even when barefoot. Contributing factors are poor choices in footwear, arthritis, or trauma.

A toe stuck in an upside-down “V” is probably a hammertoe. Some symptoms are, pain at the top of the bent toe when putting on a shoe. Corns forming on the top of the toe joint. The toe joint swelling and taking on an angry red colour. Difficulty in moving the toe joint and pain when you try to so. Pain on the ball of the foot under the bent toe. Seek medical advice if your feet regularly hurt, you should see a doctor or podiatrist. If you have a hammertoe, you probably need medical attention. Ask your doctor for a referral to a podiatrist or foot surgeon. Act now, before the problem gets worse.

Hammertoes are progressive, they don?t go away by themselves and usually they will get worse over time. However, not all cases are alike, some hammertoes progress more rapidly than others. Once your foot and ankle surgeon has evaluated your hammertoes, a treatment plan can be developed that is suited to your needs.

Often padding and taping are the first steps in a treatment plan. Padding the hammer toe prominence minimizes pain and allows the patient to continue a normal, active life. Taping may change the imbalance around the toes and thus relieve the stress and pain. Anti-inflammatory drugs and cortisone injections can be prescribed to ease acute pain and inflammation caused by the joint deformity. Custom shoe inserts made by your podiatrist may be useful in controlling foot function. An orthotic device may reduce symptoms and prevent the worsening of the hammer toe deformity.

Ordinary hammertoe procedures often use exposed wires which extend outside the end of toes for 4-6 weeks. Common problems associated with wires include infection where the wires come out of the toe, breakage, pain from hitting the wire, and lack of rotational stability causing the toe to look crooked. In addition, wires require a second in-office procedure to remove them, which can cause a lot of anxiety for many patients. Once inserted, implants remain within the bone, correcting the pain and deformity of hammertoes while eliminating many of the complications specific traditional treatments.